There’s a bit of confusion these days about what the term “indie” means. We had the latest Humble Indie Bundle feature the 13-million-dollar budgeted Psychonauts alongside the less-expensive but no more “indie” Bastion. Then, before that, billion-dollar Epic Games declared themselves to be “big indie.” Indie news channels are being clogged with news about professional game developers who’ve formed micro-studios and use the indie label as a marketing ploy to hype their work. It’s a bad trend because it’s taking the spotlight away from teams like Psydra, who embody the true meaning of the term “indie”, and have created a wonderful—and woefully neglected—little RPG called Dark Scavenger. 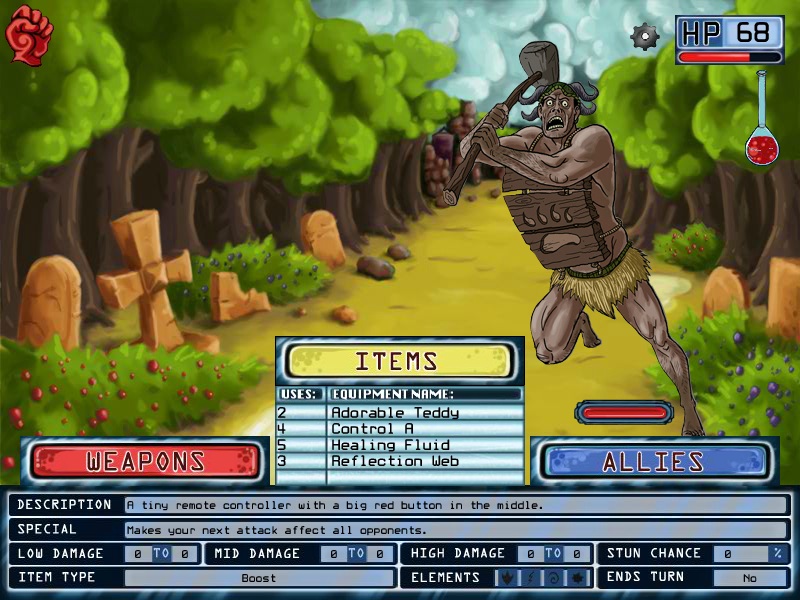 That gameplay is equally divided between combat, exploration, and crafting, and everything–everything–revolves around the use of weapons, items, and allies. Everything. In battle, you use these things to carry out turn-based attacks and support tasks. During exploration, you will often be asked to sacrifice something (or several somethings) in order to get through various sticky situations. Finally, crafting is the only way to get new gear, which is something you’ll definitely want to do that at every opportunity because everything has a limited number of uses, and they get used up right quick.

This focus on weapons, items, and allies makes every decision in the game a meaningful one. Do you give the creature you’re talking to a powerful weapon to help them out in the hopes that the favour will pay off later (and it no doubt will)? Or do you keep the weapon for yourself just in case you fight a dangerous enemy that is weak against it (and that will no doubt happen as well)? Do you sacrifice an ally or two to cause a distraction so you can avoid a fight (a smart choice because fights tend to be difficult and drawn out)? Or do you engage with the enemy instead (a smart choice because winning a fight could lead to the discovery of key items and loot)?

The game constantly throws these significant risk-reward decisions at you, and it doesn’t make it easy to know what the “right” thing to do is. Sometimes battling an opponent will get you something good for your trouble—the aforementioned key items and loot – sometimes it will just drain your resources and give you nothing in return. The same is true of trying to take the peaceful way out: many situations ask you to sacrifice multiple items, and they don’t always lead to a reward. Even deciding to not do anything at all carries a huge risk with it because you won’t get any loot to craft new items from, although you will get through the game a lot faster. Nor will you get any key items, which can make your life significantly easier if you find them.

It’s an interesting system that gets stressful at times. When every decision is an important one, it becomes harder and harder to make them. This is especially true about two-thirds the way through any given chapter, when you’re running low on stuff and you don’t know what’s going to happen next. And in this game, anything can happen next. Seemingly innocuous decisions made early on can come back to haunt you in a bad way. If you don’t have the right gear to deal with those twists, you could find yourself in some very difficult fights. For example: in one chapter I had the option of crafting a certain ally from a piece of loot, but decided to create a weapon instead. In the next chapter I found out having that ally would have let me avoid a difficult boss fight that seemed to drag on for a long time.

And that’s one of the two negatives about Dark Scavenger: it feels like it takes forever to play. I couldn’t sit with it for more than an hour at a time, and it always felt like the longest hour ever. This wasn’t because the game is bad, it’s just that you’re constantly under the stress of making tough decisions with no idea of what is “right” and “wrong” that you become exhausted from playing. There’s no pacing applied, no occasional string of easy scenarios to break up the tension to provide some relief. The humourous writing that laces through everything helps take the edge off a bit, but not enough to keep me playing for lengthy periods of time.

The second negative is a bigger one: Dark Scavenger is a Flash game, which means if you (or anyone else, or an automatic cleanup script) clear your browser cache, your saved game will be deleted. I don’t hate the Flash platform, but I don’t understand why developers choose to target a Flash projector for their desktop releases when they can create an AIR executable which does the same thing but won’t lose your save data when you flush your browser’s cache. It’s not hard to do, either. I know because I’ve done it myself.

Conclusion – Is It Worth The Money?

At the low price of 5 dollars, I would have to say yes, Dark Scavenger is worth the money. It’s funny and inventive which does something unique within the RPG genre. If you’re a fan of indie games, RPGs, laughing, and making meaningful decisions, then you should definitely pick this up. It doesn’t have the slick production values a game produced by a professional micro-studio would have, but it has a lot more heart than they could ever provide.