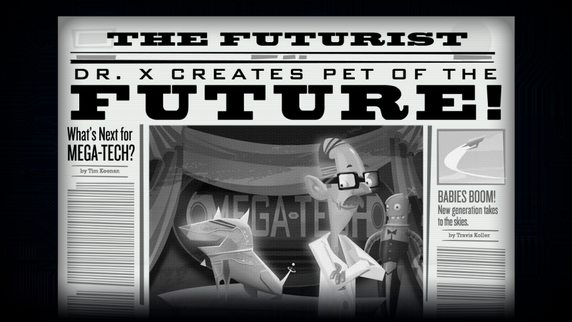 A Virus Named TOM is a tight little puzzle game with a neat twist. You play as TOM, a computer virus created by the archetypical deranged genius Dr. X. Thanks to Dr. X’s innovations, his erstwhile employers, Mega-Tech, have created the City of Tomorrow – a retro-futuristic 60s flavoured technological paradise of automated sidewalks and robotic pets. After his brilliant ideas take a turn for the homicidal, Dr. X is fired by the company and creates one last invention – TOM, a virus designed to frazzle all the city’s circuitry.

Half the game plays almost exactly like Pipe Dream (more familiar today as the hacking mini-game from Bioshock). You are given a grid of square tiles which depict a pipe, or circuit in AVNT’s case. Solving the puzzle requires rotating the tiles to connect the circuitry; every part of the circuit must be connected to a source of the ‘infection’ to beat the level.

By itself, this is a tired old concept that’s been wheeled out in puzzle and adventure games innumerable times before. But this is where AVNT gets clever. The other half of the game involves handling TOM himself, depicted as a one-eyed nanobot. Rather than clicking on tiles to spin them, you control TOM with the keyboard or an Xbox controller.  He floats swiftly along the gridlines formed by the edges of the tiles, and to turn a tile 90 degrees you hold a button while moving TOM around the corner of the tile you wish to manipulate. At first this just seems like a finicky way of telling the game which tile to turn, but soon Mega-Tech retaliate against TOM’s sabotage efforts, deploying drones that patrol the grid, draining energy on collision and respawning you at the corner of the level.

Pretty soon, AVNT becomes a tricky game that requires constant multi-tasking – while one half of your brain is playing Pipe Dream, the other half is playing Pacman, darting and weaving, picking a path through the enemy drones. To make matters worse, your energy bar also functions as a timer and is constantly counting down even when you’re successfully avoiding enemies. The designers are constantly throwing in new complications – ‘game over’ tiles that can’t be connected to the rest of the circuit, smart drones that actively chase TOM down; and, perhaps most devious of all, mystery tiles whose contents can’t be seen without connecting them to the infection.  The later stages of this game can get really tough.

There’s a good amount of content, too. The single-player campaign, of fifty levels, is about six hours long and is held together by amusing animated cutscenes inspired by vintage advertising posters. TOM rampages through five of Dr. X’s inventions before moving on to the city itself, and every machine ruined results in a cutscene and an irate email or two from Mega-Tech management. In addition, there are fifty co-operative levels, which are designed, in a nice touch, for local play, plus a battle mode. Up to four players can join in, sharing the keyboard and controller – the multiplayer mode is a major selling point and many players will want to pick it up for the unusual local co-op alone.

What’s not so good about TOM? Well, while the movies and menus look slick and are full of character, most of the time you actually spend playing will be spent staring at a grid full of tiles with not much in the way of visual variety. While it’s always a clean and readable design, the look of the different areas doesn’t alter drastically. The look of the main game lacks personality, which is a shame given how nice the bows and ribbons tied around it are. The same goes for the music – pleasant, upbeat synthesizer tunes throughout that suit the theme well, but soon get repetitive and are not likely to inspire lasting passion.

There’s also a fine line between challenging and annoying. On one occasion where I had worked out a solution to a puzzle but was constantly prevented from executing it by the drones, I was driven to quit in frustration. It’s certainly the wrong game to give someone who enjoys puzzles but doesn’t have the reflexes or the patience for arcade-style gaming.

Also – Dr. X? Mega-Tech? Couldn’t they have thought up some slightly more original names? This feels like an odd nit to be picking, considering A Virus Named TOM is named something as offbeat as a A Virus Named TOM.

Is It Worth Your Money?

Do you like head-scratching puzzle games? Do you like tense, reflex-heavy arcade games? If both are your cup of tea, then AVNT is practically a full-blown tea set and priced exactly right too. If you didn’t answer yes to both questions, then give it a miss.