The dash/time management genre of PC games has died down quite a bit over just three short years.  Back then, the popularity of titles like Diner Dash lead to a massive influx of [insert an event here] Dash.  Imminent Games looks to bring back this style of games with their adorably fun, Drip Drip.

The basic premise of Drip Drip is to travel around the United States in an effort to prevent various buildings in each city from being destroyed by a massive rain storm.  You are given tools which range from small sauce pans to huge trash cans along with others such as hammers, brooms and pumps to aid in your efforts.  The player is asked to use these tools to collect drips of water which prevents the building from being flooded.  You make money by tossing water out of windows.  The more water you remove, the more money you acquire.  You then use the money to bring on more tools in the event you need backup.

In each city, you are given a distinct type of building to save.  Each building can be anywhere from a simple slum to a five-story skyscraper.  Within each structure there are floors with doors, windows and stairs to aid in the movement of your tools.  During the beginning levels, each floor has its own window for easy water disposal.  As your progress in the game, those windows are placed sparingly throughout the building.

Early on, the most annoying problem with Drip Drip is the inability to see the entire structure.  You are forced to use the mouse wheel to scroll from top to bottom.  There is a clickable mini-map in the lower left hand corner which indicates any current issues the building is facing, but when action gets to the point where you start to panic, the mini-map becomes almost useless as you frantically scroll up and down to find the issues yourself. However, as more levels are completed, the scrolling becomes less of a bother.  It was simply a matter of getting used to this control scheme.  Perhaps the game would become too easy if you were to see the entire building.  In our interview with developer, Thomas Konkol, he goes into greater detail about the zoom issue.

On Medium difficulty, the enemies in Drip Drip are hit and miss.  The UFO and Ghost will attempt to steal your tools, but with two simple clicks, the crisis will be averted.  The Witch Doctor, however,  is a more difficult because of how slowly it moves through the building. If you do not have a broom handy on the floor where it finally settles, you are faced with the prospect of a massive lightning storm which can severely impact your game flow as you must be sure to move any tools away from the path of danger.

When you get into later levels, the difficulty ramps up a great deal.  In Salem, the building is broken into two separate areas with four stories.  The difficulty comes from the lack of windows and their placement.on the floors.  The first and top floors have no windows so you are forced to keep a strong eye on the tools to make sure they do not overflow.  It may look like a cute and cuddly title, but Drip Drip can be brutally hard which is a good thing in today’s market.

In a departure from traditional time management games, the leveling system in Drip Drip works by using the tools rather than upgrading them one by one in between levels.  For example, the more you use the Trash Can, the more it will increase in speed and the amount of water it can hold.  At maximum level, each tool is labeled “Super” and given a special ability such as speed increases and being able to work without the fear of being captured by an enemy.

One of the more disappointing aspects to Drip Drip is the lack of varying atmosphere between the cities you visit.  A big part of the marketing was, “travel across the USA and visit 24 exciting cities on your mission to save the buildings from extreme damage, flooding, and destruction.”  The problem is you never feel like part of any city.  In San Francisco, there is a vague attempt to recreate the Golden Gate Bridge.  A real life background photo of this and other high profile landmarks would have gone a long way in creating a great sense of being in a particular city.  This may be more difficult for towns like Boise or Topeka, but in the end, aside from the overcast skies, the background art falls well short.

On the flip side, the character and building art are of extreme high quality.  The tools come to life in how they look and move.  Tools such as sauce pans and kettles give off a very cute vibe as they hop their way across your screen.  Building art is also well done.  From apartment slums to skyscrapers, every structure is beautifully detailed.

The audio for Drip Drip is great as well.  The clanking of pots and pans as they scurry along to their destinations, splatting sound of the sponge, thunder claps, lightning strikes and of course, the sounds of dripping water all come together in harmony.

With any time management game, one of the hardest things to do is keep the player interested in the gameplay.  This is usually done by introducing new characters, enemies or items into the game.  In Drip Drip, things get shaken up a bit when you are only given smaller tools which do not hold as much water to assist in saving the building.  Drip Drip also has a slew of built-in achievements to keep the completionist in you busy for quite a while. 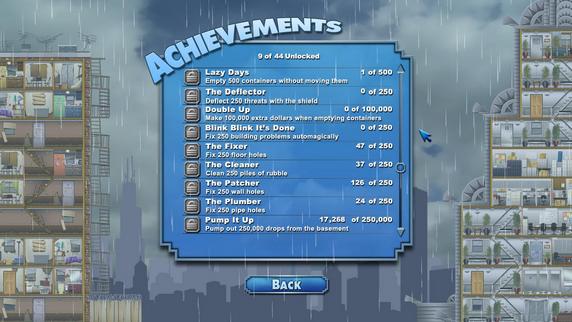 Despite its minor shortcomings, Drip Drip is a blast to play.  The gameplay is extremely easy to pick up and the learning curve on Medium difficulty was almost perfect.  Drip Drip is one of those titles in the same vein as Peggle or Plants vs. Zombies where you begin to play just for a few minutes, but before you know it, two hours have passed.  This game brings back the quality frantic dash style that has been lost in the casual market due to the popularity of HOG/Adventure titles.

On a technical side note, Drip Drip installs an auto updater developed by Thraex Software to handle new updates.  This application only runs when the game is launched to ensure the game version is current.  There are no graphical settings available, but that is par for the course in this particular genre.  The resolution is capped at 1360×768 so those with monitors running higher resolutions will see black bars at the bottom and top of their screen.

Is It Worth Your Money?

For fans of the dash genre, Drip Drip is a must-have title.  The great presentation, cute characters and crazy fun add up to time and the asking price of $9.99 well spent.  PC gamers new to this style of game should check it out too.  Do not worry.  No one will revoke your Hardcore PC Gaming Membership.

You can also watch 20 minutes of gameplay video from TPG via YouTube.